Reliant Energy is waiving late fees indefinitely and will be working with its customers on flexible payment terms and extensions to meet their needs, said communications director Pat Hammond. Reliant, which has about 1.8 million customers in  Texas , also has suspended its credit and collection activity and has stopped disconnecting customers for non-payment.’ We realize that Hurricane Ike has created a lot of difficult financial hardships for  people, and we want to do what we can to work with our customers during this difficult time,’ said Hammond . ‘Wee ask customers to call us and work out a payment with us,’ she said.

Green Mountain Energy is waiving late fees for customers who call in and let the company know they were affected by Ike, according to a statement from the company. GreenMountain also is extending its deferred payment plan.

CenterPoint Energy’s natural gas customers affected by Ike will  not receive late notices and late fees will be waived, said  spokeswoman Leticia Lowe. In addition, the utility will also waive security deposits for customers displaced by the storm, she said.

Compass Bank has waived access fees to its network of ATMs in  Houston and other cities in Texas where it figures Houstonians fleeing the storm may need quick cash, said Thomas Graham, executive vice president of communications in Houston . The bank also is allowing its small business and consumer customers to efer their loan payments, such as car and recreational vehicle loans. The deferral is up to 60 days depending on the customer’s individual circumstances. Customers  who need early access to their certificates of deposit can have them  without paying early withdrawal fees, he said. And late payments will be forgiven, he said. Graham stressed – as did other service providers  the importance of giving notice that a payment will be late.
Capital One is working with its customers affected by Ike on a case-by-case basis, said spokeswoman Pam Girardo in McLean , Bathe bank has a hardship policy and some examples of what it can do for its customers include waiving late fees, going-over-credit-limit fees and non-sufficient funds fees, she said. Capital One will also consider reducing a customer’s minimum payments, deferring payments for a limited time, waiving finance charges and waiving accrued interest. Customers need to call and discuss the options, said Girardo. Capital One also waived the ATM fees for all its customers who use a non-Capital One machine and has suspended all of its collection activity in the area.

Comerica has waived ATM fees for customers who use non-Comerica machines and has expedited its process to boost credit card limits, according to spokeswoman Pamela Cathion. The bank is also offering to donate up to $100 to a charity or community relief organization designated by a new customer who opens a bank account > with at least $2,500.

Discover makes special payment considerations on a case-by-case basis to cardholders affected by a natural disaster, said spokesman Jon Drummond. Those provisions include, but are not limited to, allowing them to delay payments, and waving minimum  payments, late fees and other charges for specific amounts of time depending on a customer’s need.
American Express spokeswoman Molly Faust said the company will handle each cardholder’s situation on an individual basis. If you need help, please call the toll-free number on the back of your card, or visit americanexpress.com and click on ‘Hurricane Response: Assistance for our Customers.’
Chase is asking its customers facing financial difficulty to contact the bank as soon as possible and it will work with them on an individual basis, according to spokesman Greg Hassell. Telecom companies

T-Mobile is topping off pre-paid cell phones that were running low at no charge to make sure people don’t run out of  service, and it has suspended collections calls in Houston and Galveston.

Allstate is offering deferred billing options, according to spokeswoman Kristen Beaman. The company will send affected customers a letter, but those who have been relocated can call their agent or 800-547-8676.

USAA will waive late fees if customers are a few days behind, according to spokesman Justin Schmitt. The company, which also has a bank and offers financial services, also will offer fixed-rate new vehicle auto loans as low as 5.39 percent for people who lost cars in floodwaters. In addition, it will waive insufficient funds fees on checking and savings accounts.

As we sit here recovering from our rather minimal effects of hurricane Ike (when compared to the other parts of the Greater Houston and Galveston Areas), we are trying to figure out how to help our less fortunate neighbors. I have had comments on ideas and one of the best is to redistribute the extra bottled water that we no longer need for survival.

I will contact Mayor White’s office tomorrow to see if there is any way we can contribute unopened bottled water for distribution to those in need. If they okay this idea, I will post a drop off point and then ask for volunteers to help us get the water to where it is needed.

If anyone out there has a better idea, I am all ears and happy to help. I appreciate any and all who are interested in this project.

I wish for you all a comfortable evening and will update this post tomorrow. 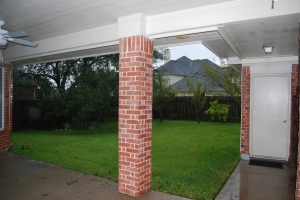 Whew, Katy appears to be fine… for all of you concerned about your loved ones. We shut down the computer to reserve battery power as our electricity is still out. In fact, we may be the only neighborhood in Katy without power… Hello, Reliant Energy…anybody out there? Our power shut down while skies were calm and still so whatever the issue is, they cannot blame it on Ike.

The winds raged all night long at gusts of 75 or so, intermittent lightning, and light rain. We are now getting a nice rain accompanied by winds that while still strong, are nowhere near last nights’ intensity. We were very lucky to have been so close to the eye of the storm and on the less dangerous side. 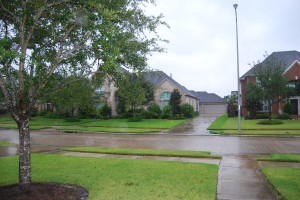 I hope that everyone else is okay. It does look pretty bad for Galveston and other parts of the city closer to the coast.

I looks like a great day to read a book or watch a movie… oh, yeah.. we have no power:). Take care all and thanks for visiting.

Yes, the wind is picking up but not as quickly as I had anticipated. In looking at the photos of the “lake” (okay, it is really a retention pond but we call them lakes in Katy) outside of my home, you can see the chop is minimal. I will most likely update more frequently as the conditions deteriorate. For now, gusty breeze and intermittent clouds are all we have at the moment. 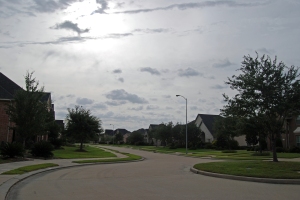 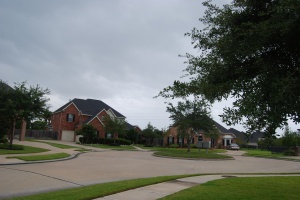 All is still fairly calm here in Katy, TX – a large suburb located about 20 miles west of Houston city center. We have experienced a few gusts that shook the trees but nothing yet that hints at the fury that Ike will most likely bring to our area.

Several of my neighbors are trying to decide who will have the Hurricane Party. Meanwhile, I have cleared out the large closet under my spiral stairway as our safe room should we need to get away from breaking glass and other dangers.
It was very interesting getting my kids involved in clearing out the luggage, out-of-season clothing and Christmas decorations to make room for our family of five (myself, hubby, two kids and pet). The boys (twin 17 year olds and scientific minded) could not quite grasp the necessity of having to go into this cramped space for safety, much less having to stock it with food, water, blankets, pillows in the event we get trapped there for a pro-longed period of time.
In retrospect, growing up in the Panhandle area of Texas, we were instructed by our schools on what to do in the event of a tornado. And again, when I moved to the Mississippi Gulf Coast and to New Orleans, I received further instruction on what to do in the event of a hurricane. I do not think my kids (having grown up in Dubai, UAE and Katy, TX) have been given the slightest hint at how to survive a natural disaster. This is something we parents should act on – but not today.
At this time, I feel we are as prepared as we can be. My safe room is ready and I hope that after the storm, my kids can look at me and say, “I told you so, Mom!”. Nothing would give me greater pleasure. But as a former Cub Scouts Den Leader, I am always prepared.
More photos to come as the weather changes. For now, sun is peeking in and out of clouds, light breeze with occasional gusts and a little sprinkle now and then . Otherwise, things are pretty darned calm in Katy, TX.
Christi Borden – Katy resident

Hurricane Ike… is this the big one for Katy/West Houston?

As we decide to “hunker down” and ride out the storm, at the moment in Katy, TX, it is a sunny, beautiful day. However, businesses and schools are closed, gas tanks are full, water and food supplies are stocked and all we can do now is wait. A very eerie calm surrounds us in our neighborhood of Grand Lakes – which feels completely deserted. Today is our rare version of a “snow day” – so where are the children? Where is everyone? Have they all left town? Should we follow their lead?

The Mayors of Houston and Galveston have issued mandatory evacuation orders for residences in low lying areas, but the Katy/West Houston area is about 45 – 60 miles from the point of landfall (wherever that may be) and our issues will most likely come from high wind and flying debris. We are fortunate to have a good, strong drainage system (hence the lakes of Grand Lakes) so we are ever hopeful that flooding will not be a major concern.

Debris could, in fact, be a big issue as we are a relatively new area and our trees do not have the deep root system that may be needed to keep them in the ground. Also, our homes (while built well) do not have hurricane clips and other construction features to prevent damage from catasrophic wind speeds. One day our building codes will have to be updated to include these items, but that is certainly a discussion for another day.

Three years ago, we loaded up the kids and dog to evacuate for Rita and ended up stranded in the 9 hour parking lot, otherwise known as Interstate 10, on the way to Austin. Meanwhile, my neighbors who stayed behind had a few minutes of light sprinkles,a few mild gusts, no loss of power and enjoyed a lively block party in honor of those foolish enough to have left. The question we deal with now: Will we be so lucky with Ike?

As long as I have battery power and web connnection, I will keep you posted periodically throughout the storm. Please say a prayer for those along the coast as they will surely suffer the brute force of this monster. As for the rest of us,  a little prayer would be appreciated as well. Stay warm, safe and dry… 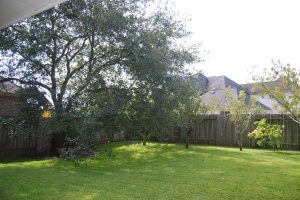